Hey!!! What is going on my fellow readers?! Are you guys ready for the season 6 to end? Because this patch will be THE final patch for this season!!! Rank will be up until November 7th as well. If you’re trying to get gold or higher, better start grinding dem lp points!

Anyways, let’s get down to the TL;DR for this patch: 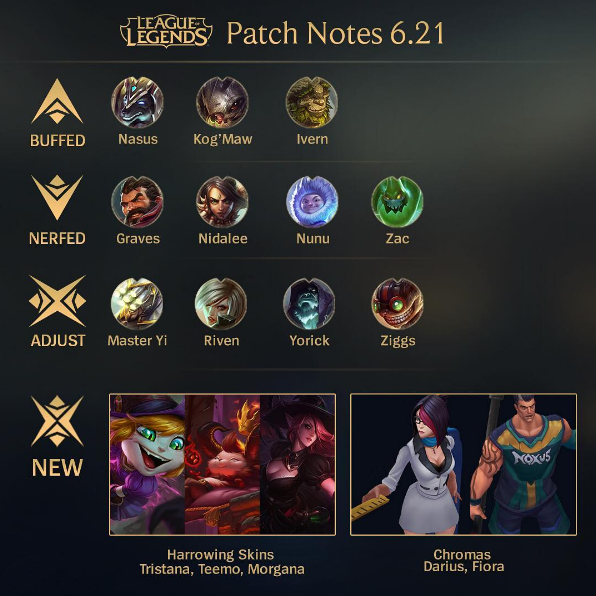 Some valuable things to know:

– Nasus: Full tank nasus will be strong and scales even better than before. Opposition jungler should invade Nasus top whenever possible.

– Ivern: Scales better than before. Still not an S tier jungler until figured out completely.

– Graves: You can now deal with Graves better for those that face checks around as Graves.

– Nidalee: Nerfed all Q W E on Cougar form and Heal as well. An excellent nerf.

– Zac: His E now shows a warning sign before 0.75 as zac lands. Now you can dodge it on time much better.

Alright fellas, now let’s get down for 6.21 Pick and Bans!

Note: Not too many changes.

Another Note: Ivern will be tested throughout the next few days to see if he’ll make it to the top pick n ban lists or not. Result: Not good enough for the current meta.

I’m hosting a small 1vs1 tournament and if you’re from NA and would like to participate for fun and of course RP Prize included, please check out here: https://youki412.wordpress.com/2016/10/17/going-to-host-an-1v1-league-of-legends-tournament-soon/

Thank you all for checking out my blogs as always. Hope my blog will help you in a League of Legends Journey.